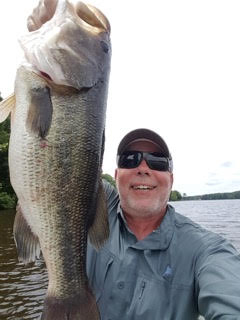 It was a Memorial Day weekend to remember for Don Facciolo (MC) as he was rowing his jon boat around Lake Trace in late May, slow drifting a jig in deeper channel waters for spawning or post-spawn bass. The week before the full moon, he sent me an e-mail to report that he landed an eight pound, eight ounce bass - his biggest so far in 2018. (Last year Don won 1st Place Bass in our TUFF Derby with a 13.5# bass. If you look in last year's blog you will see that his two big bass were caught around the full moon in June)

On Saturday (May 26th) an almost 26 inch eleven pound, three ounce lunker was caught and released.  On Sunday, a hard fought battle with an almost 28 inch largemouth lost her fight due to Don's landing skills.  She was measured at 27.75 with a girth of 21.5 inches and released alive and well.  On the official TUFF fish weight calculator (length times length times girth divided by 1200 with tenths converted to ounces), that big female rounded up to 13 pounds, 13 ounces.

And that, folks, to the best of my knowledge is, I do believe, probably the biggest bass ever caught from Lake Trace! 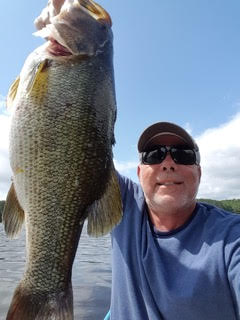 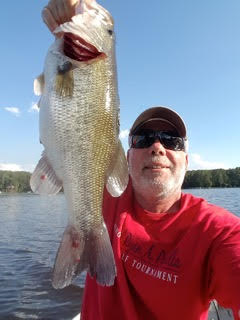 Remember that if you click on these gallery pictures, you will see a caption with more details